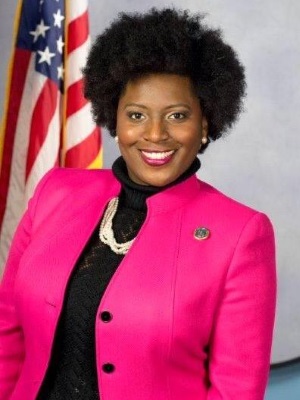 Joanna McClinton, Esquire, took the oath of office to serve the people of the 191st Legislative District on Aug. 25, 2015 after winning a special election two weeks prior.

The election to the Pennsylvania House of Representatives continues Rep. McClinton’s lifelong devotion to bettering the lives of others.

A lifelong resident of southwest Philadelphia and graduate of Grace Temple Christian Academy, she became active in the community while completing a two-year internship with the radio station WDAS. Later, she studied Political Science and Leadership in Global Understanding at La Salle University where she was a Dean’s List student, student leader and neighborhood tutor.

Immediately after graduating from LaSalle, she enrolled at Villanova University School of Law where she used her legal training to serve the public. She was an intern at Regional Housing Legal Services, the Philadelphia District Attorney’s Office and the Defender Association of Philadelphia.

She was an assistant public defender for seven years. She became the assistant chief of the East Zone during her last year at the public defender’s office and helped attorneys with case preparation.

In 2013, Rep. McClinton combined her passion for the community and love of the law by becoming chief counsel to state Sen. Anthony Hardy Williams. She worked behind the scenes in the senator’s Harrisburg and Philadelphia offices, developing policy and legislation. She also organized expungement fairs and public policy forums, and helped constituents with problems.

Rep. McClinton is active in the community. She was a youth leader at her West Philadelphia home church, Open Door Mission for more than 10 years. As a youth ministry leader, she organized positive programs for children, mentoring them and reminding them that their dreams can come true. She is a volunteer with Outreach to Youth and Hands of Compassion American Sign Language Ministry. She was an elected Board Member of the La Salle University Alumni Association Board of Directors, where she helped initiate the Minority Alumni Advisory Group. She has served as the secretary of the Philadelphia Barrister’s Association, the city’s bar association of African American attorneys, and as president of the La Salle University African American Alumni Association.

Rep. McClinton has been acknowledged for her commitment to public service and enhancing the quality of life for residents in Philadelphia and Delaware Counties by receiving several awards. They include: City and State PA’s 40 Under 40; the Barristers’ Association of Philadelphia’s Outstanding Young Lawyer of the Year award; Successful Women Acheiving Goals’ Women of the Year award; Fun Time Magazine’s Women of Influence Award; the PRE-K for PA Champion award; the Spirit of a Dove Community Servant award; the Lucien E. Blackwell Guiding Light Community award; and the Black Gala Women of Excellence award.