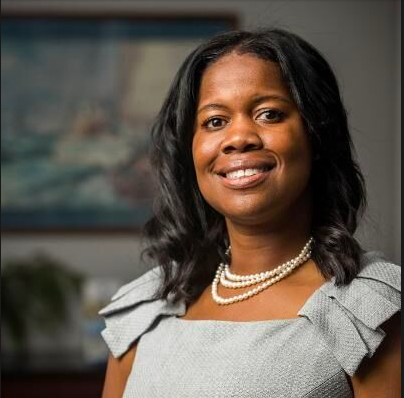 A proud lifelong resident of Delaware County, Tinu Moss grew up in Yeadon. She went through the public school system, and graduated from Penn Wood High School. Tinu attended Duke University on an academic scholarship, majoring in Environmental Science and Policy with a minor in Geology. After graduating, she first started her career as a Financial Consultant for Prudential Securities in New York, and then Merrill Lynch in Philadelphia.

Although she enjoyed helping individuals navigate the financial market, she decided to pursue a legal career and attended Temple University’s Beasley School of Law. Tinu graduated with her Juris Doctorate as well as an LLM in Taxation. During her time at law school, she had the high honor of receiving the E. Wallace Chadwick Memorial Scholarship; interning for the City of Philadelphia Law Department; and, serving as a law clerk for Judges Sandy L.V. Byrd and Sheila Woods-Skipper.

After graduating, Tinu practiced in Philadelphia for five years before beginning her career in Delaware county. For the last decade, she has been representing Delaware County residents in matters of family, civil and criminal law. Sensitive to young-offenders, Tinu requested to be on the court-appointed list for juvenile criminal cases, with the hope that she could make a difference in their life. In addition to her legal practice, Tinu Moss also served as the Borough Manager for Yeadon Borough.

Tinu Moss has been active in the Yeadon and Delaware County community the majority of her life. Tinu was an elected Democratic Committee Member in Yeadon from 2010 – 2018, volunteering for the Democratic Party for a number of years prior to her elected position. She is an active member of the First Baptist Church of Darby where she’s served as an usher. During her leisure time, Mrs. Moss enjoys spending quality time with her husband, Anthony Moss Sr., and their two children.