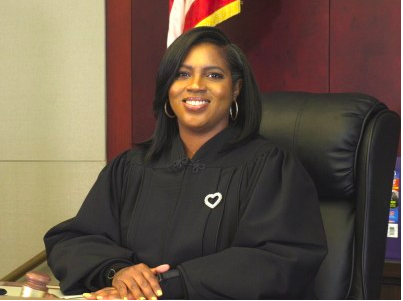 Judge Timika Lane was born and raised in West Philadelphia. She attended the McCall School, Friends Select and West Catholic High School during her formative years. She is a graduate of Howard University in Washington D.C., where she excelled as a student leader, and was initiated into Delta Sigma Theta Sorority, Incorporated, Alpha Chapter. The value of hard work and public service were instilled in her at a very young age by her grandmother and mother, now a retired Philadelphia Police Detective, values she has passed on to her own daughter Tori, a student at Howard University. With those values engrained in her, she took on the challenge of teaching social studies to middle school students in Prince George’s County, Maryland.

Following a successful teaching career, Judge Lane decided to pursue a career in law. In 2002, she received her Juris Doctor degree from Rutgers-Camden School of Law in New Jersey. While attending Rutgers, she continuously sought ways to serve her community and worked for the Pro Bono Domestic Violence Project, the Bankruptcy Pro Bono Project and co-chaired the Black Law Students Community Outreach program. Her legal career has been defined by her desire to serve the community. After serving as a law clerk, she represented clients in various areas of family law, ranging from support to custody issues, and represented indigent families involved in dependent matters as a Certified Child Advocate Attorney. Afterwards, she went on to work as a major trial attorney for the Defender Association of Philadelphia. Her primary duties were to litigate complex criminal jury and waiver trials for indigent adults and juveniles in Philadelphia’s criminal justice system. She also served as a supervisor and an attorney for the Safe Surrender Program at True Gospel Tabernacle Family Church.

She left the Defender Association to serve the community in a different capacity, as Chief Legal Counsel for State Senator Anthony H. Williams and as the Democratic Executive Director for the Pennsylvania State Senate State Government Committee. In this role, she was on the front lines challenging Pennsylvania’s restrictive Photo ID law, organizing rallies and drafting legislation to counter its disparate impact on seniors, minorities, LGBTQ+ and the poor. Additionally, she assessed the constitutionality of proposed and existing legislation, and provided legal advice and guidance regarding the legal implications of legislation, regulations, and administrative policies. She also served as an Arbitrator and member of the Pennsylvania and Philadelphia Bar Associations.

In January 2013, after much soul searching and consultation with her family and Pastor, she decided to pursue a seat on the Court of Common Pleas. To accomplish this goal, she left her position and sold her car because she knew the challenges she would face. Despite seemingly insurmountable odds, she forged ahead walking by faith. Her tireless and dedicated approach was met with success when she was officially elected to the Court of the Common Pleas in November 2013. Judge Lane received a rating of “Recommended” for Superior Court by the Pennsylvania Bar Association in 2021.

She is presently assigned to the Major Trials program in the Criminal Division. Here, Judge Lane is the sole judge handling human trafficking cases. In addition, she handles serious felony criminal matters including but not limited to, domestic/family violence, sexual assault, attempted murder, aggravated assault, arson, robbery and burglary. She also handles Investigative Grand Jury matters and oversees the Uplift, Fast Track and Branching Up (formerly Roots to Re-entry) programs.

Currently, she serves as Chair of the Board of Judges Board of City Trust Committee, Co-Chair of the Local Criminal Rules Committee and a member of the Communication and Community Affairs, Jury, FYI and Women Judges Initiative committees. Recently, the Pennsylvania Supreme Court appointed her to the County Adult Probation and Parole Advisory Committee (CAPPAC) where she serves as Co-Chair. Additionally, she served on the Elder Task Force and as former secretary for the Clifford Scott Green Chapter of the National Judicial Council.