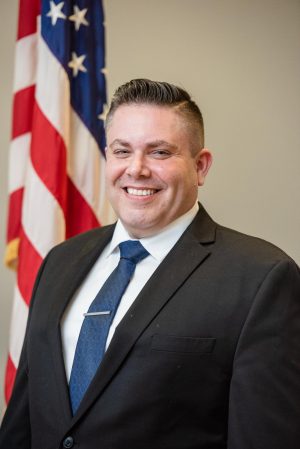 “Hi my name is Rob Yannuzzi and as of 2/7/21, I am the newly elected Mayor of Eddystone. I’m honored to be running for State Committee. I’m a United States Navy Submarine Veteran where I served 6 years as a missile technician. After 9 deterrent patrols and an honorable discharge, I worked as a civilian in the US Navy’s submarine program as a private contractor where I worked as a technical writer, writing procedures and manuals for sailors operating the U.S. Navy’s nuclear weapons which is what I worked on when I was in the Navy. I ultimately worked my way up the proverbial ladder and I eventually worked on submarine projects affecting the entire United States submarine fleet at shipyards vital to U.S. interests. I was at the height of my career but in 2016, when Trump was first elected to the Presidency, one of the first things he did was to stop work at all the shipyards. At which point, the company I worked for decided to lay off it’s workers and as a result, I got caught up in the layoff and had to start from scratch.

I was motivated to do something so that this doesn’t happen to anyone else, so I started the first Democratic committee in Eddystone’s history. We were successful in our endeavors and in 2019, two other Democrats and myself were elected to Eddystone Borough Council. again, another first in Eddystone’s history. I was appointed Vice-president of council and served for two years on Council. Just recently, I won my Mayor race with a close victory of only 3 votes. I’m sure you have heard that the Republicans took me to court to challenge the results, but they were unsuccessful, and I was just sworn in on the first Monday of February.

During that period of time I started my career path in government by ultimately being hired as a deputy campaign manager for Dave Delloso’s successful campaign for State Representative. After the blue wave of 2018, I interviewed with Congresswoman Scanlon’s office, Representative O’Mara’s office and Representative Delloso’s office. I decided to take a job as a constituent service advisor to Representative O’Mara and I ultimately took a job with Representative Delloso and now serve as his Chief of Staff. I see the importance of putting good leaders in office in Harrisburg and Washington D.C. I want to make important decisions about who the party endorses and who we put in office at the highest levels of government. Decisions that represent the best interests of Delaware County.

I come from a working-class community where we have a large amount of people at or below the poverty line and I would like to get people elected in positions to represent the most vulnerable of our society because I feel that we have an obligation to do so. I also believe in what we have accomplished in Delaware county since 2016 and I want to bring that level of accomplishment to the state committee.
Also, with the events of January 6th, Veterans are realizing the hypocrisy of the Republican Party and I feel that we have a great opportunity to welcome more Veterans into the Democratic party by showing that we include, value, and honor their service, and I think I can be that voice.”