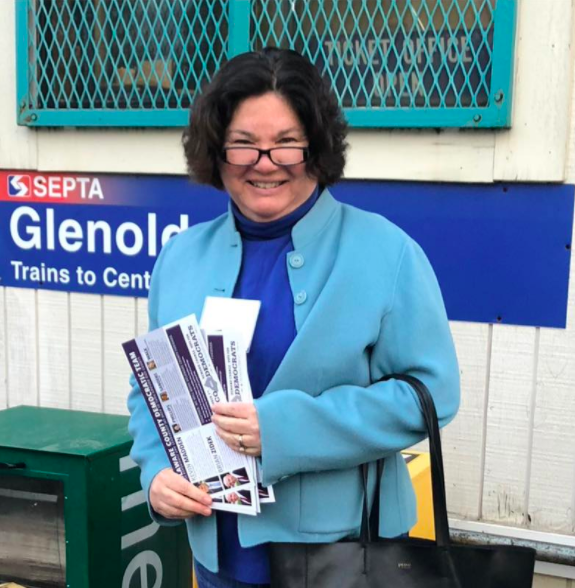 In 2017 Joanne and the slate of Democratic candidates won an historic  election in Delaware County: Joanne became the first Democrat elected Controller  in over 140 years! Upon taking office in 2018, Joanne promised to be an  independent voice for Delaware County residents and taxpayers and bring  transparency and best practices to the office. Since her election she has made good  on her promises. She published financial reports and audits on-line for the public,  created a fraud hotline, instituted a Delaware County Unclaimed Property program,  and has saved money for the taxpayers by opening opportunities for new  accounting firms to obtain audit work.

Her office has won the Government Finance Officers Association’s  highest award for financial reporting for the County’s Annual Report for all three  years she has served in office. Joanne has transformed the Controller’s Office,  turning her job into that of a working manager who has recruited financial  professionals and accountants from all across Delaware County. She has  encouraged professional development for her staff to enable them to better address  the financial needs of the County. Joanne and her staff work with every County  department, regarding payroll, accounting, accounts payable, retirement, and  audits. She and her colleagues have saved hundreds of thousands of dollars  through oversight of contracts and bank accounts, and reorganizing audits.

Joanne also serves on the newly formed Jail Oversight Board, and as  Secretary of the Retirement Board, which administers the County’s pension fund.  County Council appointed Joanne to represent Delaware County on the Board of  the Pennsylvania Convention Center Authority. In her role as Controller she  attends every meeting of County Council, serving as a voice on behalf of taxpayers  to support best practices and smart spending.

Joanne brings to her office extensive experience in both the private  and public sectors. In 1995, she became a partner in the national law firm Ballard  Spahr LLP and is currently special counsel. In 2006 Governor Rendell appointed  Joanne to be the Director of the Commonwealth of Pennsylvania’s Bureau of Real  Estate, where she was responsible for the handling the leases and real property  needed by the Commonwealth’s executive agencies

Joanne and her husband, Wade, are 33-year residents of Middletown  Township. Their two children attended the Rose Tree Media School District public  schools. The family was active in community sports, especially soccer, and Joanne  coached both boys and girls intramural and travel teams for almost 15 years. She  became a licensed coach and served as a director of the Rose Tree Soccer Club.  She also served as a member of the Middletown Parks and Recreation Committee.  Joanne received her B.A. from Ursinus College, where she was a member of the  school’s nationally ranked field hockey team, and earned her law degree summa  cum laude from Delaware Law School of Widener University. Joanne was  valedictorian of her law school class, an editor on the Law Review, and member of  the Moot Court Honor Society.