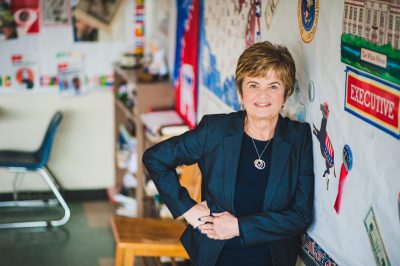 Deb Ciamacca is running for the State Legislature in the 168th district because she has spent her life serving her country and community and she wants to be a state representative who puts our community first. She has fought to keep guns out of our schools and to have fair representation through non-gerrymandered districts, and she wants to take that fight to Harrisburg as your State Representative. A Marine Corps Veteran and teacher, Deb believes our public officials should work together to solve the problems facing our community: creating a public education system for the 21st century, expanding access to affordable health care, and protecting our environment for future generations.

Deb is the only candidate with the experience to do just that. After attending, Penn State on an ROTC Scholarship, she served as an officer in the United States Marine Corps where she never asked if someone was a Republican or Democrat: just what is the mission and how do we get it done. After leaving the Marines, Deb worked in the private sector as a Manufacturing Manager at several businesses, returning to Pennsylvania to work at Neutronics, a family owned environmental and instrumentation company in Exton. As a Manufacturing Manager Deb led hundreds of employees and understands how local business and workers are affected by health care and the environment and the role they can play in solving those tough problems.

After her time in the private sector, Deb was called to serve her community again. She became a Social Studies teacher at Conestoga High School and taught government, economics, and world cultures to thousands of students. As an educator, she understands what our children need to succeed as adults and citizens in the 21st Century and how to fight for that in Harrisburg.

Deb believes in common sense solutions to the problems facing Pennsylvania. In her classroom she asked students to look for the solutions that unite us rather than the problems that divide us. She learned in both the Marine Corps and in the classroom that we can’t ignore the tough problems – we have to face them head on. Deb will work tirelessly to fix education funding so that every school works. Deb will take on the entrenched interests who believe that politicians should draw our district boundaries, not the people. She will fight to give every Pennsylvanian health care and to bring good jobs at good wages to the state.

Deb lives in Media with her husband Rich, a Navy submarine veteran. Her son Chris lives in Phoenixville with his two Corgi pups: Logan and Reinhardt.